In between heaven and hell
Guttestreker

A depiction of the party and exception we had at Hells Angels Alnabru on the 30th. of September 2017. Within these walls there are a area of freedom for everybody between heaven and hell. This means that all gods and demons can come here to play and party, and so they did.

There where many famous gods and diseased legends attending the party. Thor, Ganesha and Buddha is just a few of the descent guests. Even our hero Albert Einstein had the pleasure of attending. There where also regular human beings attending, and they all seemed to have a good time. While the Hells Angel tried to lure God down from the skies, a clear reference to Michelangelo’s Sistine Chapel.

Outside the fences, life just kept on like ever before. People drove home from their boring job, to their boring homes and kept on living their boring lives. While the outlaw biker gangs went on with their business, police tried desperately to stop them, so far without any result to show for. 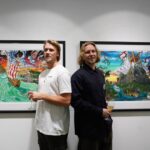